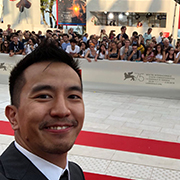 With twelve years of experience in the entertainment industry, Sam Wey is a uniquely well-rounded creative director and game designer focused on crafting compelling interactive experiences. His passion for video games has fueled a career spanning art, game design, and story development. Born in Chicago, Illinois to Chinese-American immigrants, he earned a Bachelor of Arts degree at Columbia College in Chicago, where he studied film and computer animation. This laid a solid foundation upon which he began his career as a 3D artist at Nickelodeon Animation Studios on shows like the Kung Fu Panda television series. After discovering a passion for crafting experiences, he transitioned to game design for video games like ABZU, Friday the 13th, Star Citizen, and Capcom's Lost Planet 3. His interest in emerging immersive technologies has inspired his most recent accomplishments; including the AR app, Follow Me Dragon and the VR LBE Jurassic World VR Expedition. He made his directorial debut on the VR narrative, Fresh Out which made its world premiere at the Venice Film Festival. Sam Wey provides creative leadership by leveraging a deep understanding of game production to elegantly tie together aesthetic and technical disciplines in support of rich experiential design. He recently founded Coal Interactive and has been working hard to release Bullet Time AR. In his spare time, he explores Beijing's restaurant scene with his wife and practices Brazilian jiu-jitsu to stay fit and deadly.